skip to main | skip to sidebar

Creating seasonal recipes that are inspired by my passion for local, organic foods 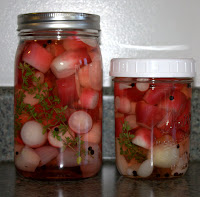 We came back from our long vacation with a veritable crapton of radishes ready to jump out of the ground. Not too surprising, since the kids planted them a week before we left. Okay, maybe crapton of radishes is a bit of an exaggeration, but 35 radishes I cannot eat in one week.

Henry loves radishes, Emma thinks they are "too spicy", I can only eat a few as they irritate my stomach and my husband, who can plough through them, had the stomach flu last week. So, what's a gardener with a big bowl of radishes to do?

Well, during one of my many hours spent in the garden last week, I remembered an article I read in my new Hobby Farms Home magazine, Oh Yes You Can!, which is all about canning, go figure. Anyway, one of the recipes is for pickling radishes, which didn't strike me at the time as useful, but am glad I remembered it.

So, the radishes, coupled with the garlic I just pulled out of the ground (those little guys that didn't exactly make it to a full head), and some thyme from the garden went into the canning jars (after blanching said radishes and garlic). I poured the hot vinegar/salt/sugar/peppercorn solution in and let them cool before refrigerating.*

I love the combination of the garlic, radishes, pepper and thyme. Adding in the herbs really gives it an extra flavor that makes it taste more complex than just pickled radishes. Another combination that I read online was to use rice vinegar, ginger root and dill.

Since I have a bunch of beets growing for our fall garden, I'm anxious to try something similar with making pickled beets, in addition to roasting them as usual. Anyway, here's an adaptation of the recipe from the magazine. I'm not using exact measurements for stuff being pickled, just for the brine. The brine will be enough for 2 quart jars:

Wash and stem the radishes, cutting the larger ones so they are all uniformly the same size. In a medium sized pot, boil water. Boil garlic until soft, remove and chill in an ice water bath. Boil radishes for 30 seconds, remove and chill in an ice water bath. While the garlic and radishes are cooling, heat the brine until boiling. Put the drained radishes, garlic and thyme sprigs in quart jars, filling about 2/3 full. Pour boiling brine mixture into the jars and seal, leaving them until they are cool.

Place jars in the refrigerator and consume within 2 - 3 weeks. The pickled radishes can be eaten as soon as they are cold, but you may want to wait a day or so for the flavors to meld.

*These would be considered refrigerator pickles (rather than canned ones) and will only last a few weeks in the refrigerator since there's no hot water bathing going on.

Posted by Crunchy Chicken at 1:32 PM 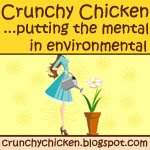 Where it all began...